During the early years, the production was completely outsourced. Then TMB has gradually invested on the site Tréfimétaux in Couëron (44) for the production of strip from rerolled supplied by parent company. The production of bars, wires, and ingots was still subcontracted.

In 1978, the KBI company sold its entire capital Cabot Corporation.

In 1985, the headquarters of BCMS is transferred to Boulogne Billancourt.

In 1986, the Japanese group NGK Insulators Ltd., a Japanese company whose headquarters is based in Nagoya, acquired Cabot Corporation, which had decided to get rid of all its metallurgical activities. Its name changed once more and became NGK Berylco France.

In December 1996, the headquarters of the Paris area has been transferred to Couëron in order to improve the whole efficiency of the company.

The company was founded in October 1971 as a joint-stock company whose capital was held by two equal shareholders: the French company Tréfimétaux, a subsidiary of Pechiney, and American society Kawecki Berylco Industries (KBI). The name was Tréfimétaux Berylco SA (TMB), its headquarters was in Paris and its production unit in Couëron in Nantes area. The first year the turnover was 13.5 million francs (2.06 million euros). 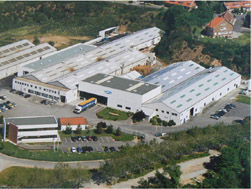